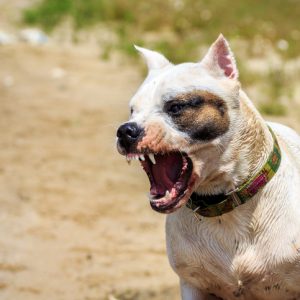 Every year, dog attacks send thousands of people to the hospital. According to recent statistics from the Center For Disease Control and Prevention, 4.5 million dog bites are recorded every year in the U.S., and a large portion of those bites get infected, leading to further complications. Whether a dog is reacting to a stressful situation, feels threatened or is simply protecting her puppies, a bite can mean serious injury, disfigurement and even broken bones.

Believe it or not, some of the smallest canines are more prone to biting. Pekingese, chihuahuas, Lhasa Apsos and Jack Russel terriers top the list for dogs that bite the most, but when considering the potential dangers of a nip, which canine breed delivers the strongest bite? The most accurate way to answer this question is by looking at the PSI strength, which is the pound per square inch of biting force.

Not surprisingly, the dogs with the strongest bites are not tiny toy breeds – they are medium and large-sized canines that are common pets in many households.

Which dogs have the strongest bites?

There are two main breeds that are associated with the most severe dog attack injuries, the pit bull and the Rottweiler, the latter of which has one of the strongest biting forces at a whopping 328 PSI.

Renowned for their endurance, agility and intelligence, Rottweilers have a stout, powerful build and are often used in police work due to their dependable guarding instincts, trainability and strength. The bite force of this popular breed is 328 pounds per square inch – more than double the average Rottweiler weight.

In terms of sheer body mass, the English Mastiff is the largest dog breed. The biggest of these gentle giants tipped the scales at nearly 350 pounds, roughly the size of a small donkey. Thankfully this breed is praised for its loving nature as its bite force is 556 pound per square inch.

This medium-large breed is cherished for its fierce loyalty, and often used for protecting property and family. Dobermans have earned a reputation for being vicious and overly aggressive, but the personality and temperament of each dog hinges on how it was raised and trained. One thing is for certain: with a bite force of 245 PSI, their jaws are capable of breaking bones.

German Shepherds are among the most popular canine pets, thanks to their keen intelligence, loyalty and ability to learn new tasks. Shepherds are often used in search and rescue missions, police operations and as service dogs, and can be wonderful companions. While they can be docile pets, German Shepherds have an extremely powerful bite force of 238 PSI.

This breed is known for its stocky, muscular build and confident nature. Historically bred as a utility dog for catching animals on working farms and protecting the owner’s property, American Bulldogs can also make nice family pets if properly trained and socialized. When threatened or provoked, they may be prone to attack, and have a bite force of 305 PSI.

Despite good training and responsible ownership, even family pets with no history of aggression can lash out and bite. If you suffered injuries from a dog bite or animal attack in Louisiana, you may be entitled to legal compensation from negligent parties. Discuss your options for legal recourse with Lafayette dog bite lawyer Bart Bernard. Call today for a free case review with no obligation to proceed! 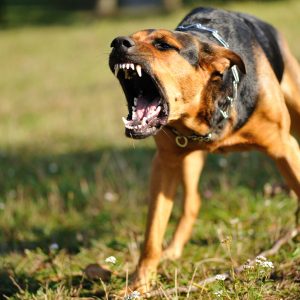 Every year, 4.5 million dog bites happen in the United States. While we tend to think of dogs as friendly and furry, many dog bites occur in the home — as many as half. Even more worrisome, 20% of the injuries caused by dog bites become infected. Infections can be serious and even lead to death.

One-half of the victims of dog bites every year are children between 5 and 9 years old.

What to Do If a Dog Bites

If you or a loved one has been bitten by a dog, it’s very important to remain calm. Do not strike or raise your voice to the dog.

Dogs bite for multiple reasons, including their own fear of being attacked. They may perceive being struck or spoken to loudly as an attack, and bite again or attack. If they are biting because they have rabies, striking or screaming at them may exacerbate their behavior.

Remove yourself immediately from the dog’s vicinity.

Then, take the following steps.

When a Dog Attacks in Louisiana

Owners of dogs who bite can be held liable under Louisiana state law if they knew or should have known that the dog was dangerous, and did not take reasonable care to prevent an animal attack.

The law also specifies that the dog cannot have been provoked. A child poking a neighbor’s animal with a sharp stick, for example, could be considered provocation in court.

Do You Need a Louisiana Dog Bite Attorney?

Animal attacks can be serious, causing injury and even death. The Bart Bernard Injury Lawyers is experienced in dog bite law in Louisiana. We will conduct an exhaustive investigation of the circumstances of your dog bite to make sure you are fully compensated for the injuries and losses you sustained, and to make sure that a dangerous dog is not allowed to harm others in the same way.

We have offices in both Baton Rouge and Lafayette for the convenience of our clients. Our initial consultation is completely free, with no obligation. Call Lafayette dog bite attorney Bart Bernard today to see how much your case is worth!

More on what to do after a dog bite:

If you’ve ever heard someone refer to the “one-bite rule” in reference to being bitten by a dog, you may have wondered what it was. It’s very simple.

The one-bite rule is related to establishing negligence in personal injury claims for dog bites. Owners can only be deemed negligent for a dog bite if they knew or had reason to know that their dog would bite someone. In other words, if a dog bites you or a loved one but had never bitten a person before, or acted in a threatening manner before, you may not be successful in pursuing a claim for negligence and personal injury.

If, on the other hand, a dog has bitten someone previously, and it bites you or a loved one, the owner may be found responsible for damages. According to the one-bite rule, once a dog has bitten someone, the owner must take steps to make sure that the dog cannot harm people. If the court finds that reasonable care to restrain the dog and protect people was not taken, and that failure was responsible for the injury, the owner is liable for damages.

Louisiana law uses the one-bite rule, but also has several other requirements for the owner to be found liable for damages.

Louisiana law does not pertain only to bites, but to other injuries as well. If an animal knocks a child down and causes injury, for example, it falls under the “dog bite” statute.

The statute also covers animals other than dogs. If, for instance, a horse causes an injury to a person, it is covered by this statute.

The owner can use several defenses. The first is that the injured party or another party provoked the animal. If a dog is fenced in, for example, and neighborhood teenagers are poking at it with a stick, resultant dog bites, occurring through the fence or as a result of a dog jumping the fence, might be considered the result of provocation.

The second is comparative negligence. An owner could argue that the injured party bears part of the blame. If neighbors cut across a backyard despite “Beware of Dog” signs prominently displayed, it can be argued that they were partially to blame for being attacked by a dog. Any monetary damages, if that argument is successful, are reduced by the percentage the court finds the plaintiff at fault.

If you have issues with a dog bite or other injury involving an animal, we can help. Bart Bernard Injury Lawyers has offices for your convenience in both Baton Rouge and Lafayette, Louisiana.

For a free consultation with a Baton Rouge or Lafayette dog bite attorney, call today or contact us online.

While dog bites are responsible for a significant proportion of lawsuits brought over animal attack injuries, an alarming number of incidents involving other animals such as ferrets, snakes, birds and cats also lead to litigation. Regardless of the type of animal responsible for causing serious harm, it is important for victims to familiarize themselves with the liability rules which may help them secure fair financial compensation.

The unfortunate truth is that even pets who appear to be fully domesticated and well-behaved can sometimes act on their natural attack instincts and produce serious injury to unsuspecting visitors. In addition, there are also situations in which individuals negligently attempt to keep wild animals on their property, in violation of local laws and regulations. Too often the result is an animal attack injury that leaves the victim to contend with costly medical bills, lasting disability, lost wages, physical agony and emotional trauma from which it can be difficult to completely recover.

Liability when animals attack in Louisiana

Louisiana statute provides that an animal’s owner is answerable for any harm it does to others, provided there is a showing that he or she knew or should have known that harm would likely ensue, that reasonable care could have prevented the harm and that such care was not taken.

In cases involving dog attacks, a clearly stated strict liability standard has been legislatively imposed on owners across the state. This means that a dog’s owner is liable for injuries to property or persons stemming from an attack which are not traceable to the victim’s own provocation of the animal. This is true even if the dog in question exhibited no prior history of aggressive behavior.

Despite the strict liability standard applied in dog attack cases across Louisiana, certain defenses do exist which may be raised by animal owners in order to escape responsibility for paying damages. For instance, a dog owner may argue that he or she had no ability to prevent what ultimately occurred, that the victim engaged in behaviors which provoked the injurious behavior, and/or that the victim was not lawfully on the premises where the incident took place. As in all injury cases, a comprehensive examination of the underlying facts conducted by a knowledgeable attorney is critical to formulating effective counterarguments in the face of such defense tactics.

Nobody expects to be the target of a vicious animal attack. Because every type of animal attack requires thorough investigation and sound legal strategies, the aid of a seasoned injury attorney can be vital to obtaining the outcome victims deserve. If you have suffered due to the actions of a dangerous animal and the potential negligence of the person responsible for housing and controlling it, Louisiana dog bite attorney Bart Bernard is prepared to help assert your right to justice. To learn more, call the firm’s Baton Rouge or Lafayette location.