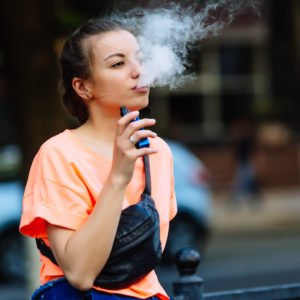 Bart Bernard Injury Lawyers is investigating JUUL lawsuit complaints based on allegations of deceptive marketing, negligence, failure to warn of health risks, and strict product liability. Explore your rights to compensation by scheduling a private case evaluation, free of charge.

E-cigarettes, contrary to marketing claims, are not a safer alternative to smoking. Despite this fact, vape sales have steadily climbed in the United States, and one brand’s market presence has grown exponentially in the last three years – especially among teenagers. The JUUL vape pen, manufactured by the California-based JUUL Labs, hit the market in 2015 and has quickly become the most popular vaping device among teens.

Vaping uses a battery-powered or chargeable e-cigarette to simulate smoking. Vaping devices utilize a liquid-filled pod or cartridge that contains nicotine and chemical flavorings. A heating element activates when the e-cigarette is puffed on, turning the liquid into a vapor, which is then inhaled. Because there is no flame involved, e-cigarettes do not produce tar, and other known toxins, but vapers are still inhaling large amounts of nicotine – a very addictive drug.

Some nicotine liquids contain chemicals that have been shown to create formaldehyde-releasing agents during the vaping process. Formaldehyde has been classified as a “probable human carcinogen” by the EPA.

According to the National Institute on Drug Abuse, JUUL has captured more than 70 percent of the teen vaping market, thanks in part to their enticing sweet-flavored nicotine pods and discreet design. The JUUL e-cigarette could be confused for a USB flash drive, and teenage vapers have become so enamored with the product that they use the brand name as a verb. “JUULing” is now just another way to say vaping, which is inherently dangerous to the health of adolescents.

In a recent JUUL lawsuit, the e-cigarette maker is accused of employing deceptive marketing campaigns to target minors, essentially addicting a new generation of adolescents by downplaying the potency of its nicotine. The suit, filed by the NC Attorney General, joins similar litigation that contends JUUL Labs unlawfully marketed their products to teenagers, attracting young customers with flavors like cool cucumber, mango, crème brulee, and fruit.

JUUL vape pods contain as much as 5% nicotine – the equivalent of a full pack of tobacco cigarettes. Studies have shown that minors who use JUUL vape pens and other e-cigarettes have a higher risk of long-term nicotine addiction.

“JUUL introduced a slick, sweet-flavored, high-nicotine product and marketed it in ways that one study found was patently youth-oriented,” stated Matthew L. Myers, President of the Campaign for Tobacco-Free Kids.

Adolescence is a critical period for the developing brain, when memory, emotional regulation, and executive functioning skills are still in the process of maturation. While more research is needed to identify the lasting effects of e-cigarette use on the teenage brain, early studies indicate that nicotine exposure can impact cognitive function – affecting the brain’s reward system. Teenagers who become addicted to nicotine may be more inclined to abuse other, more damaging substances in the future.

If your teen uses or has used JUUL e-cigarettes, we encourage you to explore your legal options with Bart Bernard Injury Lawyers.  Our experienced attorneys have 20 years of experience helping people secure fair compensation for their harms and losses.

There are many types of monetary damages that can be sought in a JUUL vape lawsuit. Find out if you have a case and Hit Hard with Bart Bernard™.

Teens and JUUL: an epidemic of underage vaping

The Former FDA Commissioner has called underage vaping “an epidemic.” JUUL Labs maintain that their vape products are not targeted toward minors, and are meant to help adults quit smoking. But parents across the nation are voicing concern about their nicotine-addicted kids, some as young as 12 who are drawn to the delicious-sounding nicotine flavors like mango and crème brulee.

JUUL pods have almost twice as much nicotine as comparable e-cigarettes, making them even more hazardous for young users who may vape several pods in one sitting. Nicotine, according to researchers at the UK’s Royal College of Psychiatrists is more addictive than alcohol and is equally addictive as cocaine.

Health risks of JUUL and e-cigarette use

The enormous popularity of JUUL vape pens among teenagers exposes them to high doses of nicotine that can negatively impact their emotional and physical development. Other possible health risks of e-cigarettes include:

Battery-powered vape devices also have the potential to spontaneously explode. Hundreds of e-cigarette explosions have been reported, and several instances have resulted in severe burns, scarring and personal injury.

Bart Bernard Injury Lawyers operates on a contingency fee basis, meaning we advance all litigation costs, and are only paid if we recover a settlement or verdict in your case. Our product liability lawyers are currently reviewing JUUL lawsuits and welcome the opportunity to hear your story.

Call our offices toll-free for more information about JUUL e-cigarette litigation, and your rights to compensation.