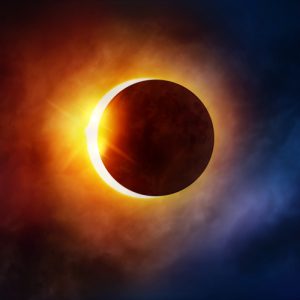 Distracted driving and driving while impaired by alcohol or other drugs are the top causes of car accidents. But even people who are teetotalers, and who strictly avoid distractions while behind the wheel, can end up in a ditch or worse. The following list proves that crashes may be attributed to virtually anything—from SpaceX rocket launches to apples.

In December 2017, SpaceX carried out its final, and successful, launch of the year by sending out a Falcon 9 from Vandenberg Air Force Base. Its payload was 10 communications satellites. The launch wrapped up an impressive year for SpaceX, and a few area drivers were so impressed by the rocket launch that they caused a multi-car wreck on the 10 Freeway in Banning, presumably because they were busy gawking at it. Thankfully, no one was killed in the accident.

2. The movements of celestial bodies

Everyone knows you’re not supposed to look at the eclipse unless you’re wearing those nifty eclipse viewing glasses. But some people can’t resist the temptation to self-inflict vision loss. After the eclipse of 2017, a woman in San Francisco blamed her car accident on temporary blindness caused by looking at the sliver of sun. A mother and her young daughter were crossing the street in front of the car, and were both struck. Fortunately, neither was killed, but the girl sustained a broken arm.

The total eclipse and SpaceX rocket launches are objectively verifiable events. Even though insurance agents and police officers might not let those drivers slide, they at least had a concrete excuse for the crashes. Things get a little trickier when drivers try to convince their insurance companies that they weren’t at fault because the crash was caused by UFO sightings. Ghosts, apparitions, and other paranormal phenomena have also been blamed for car accidents.

4. Using your feet to stop a car

Even if The Flintstones was before your time, you’re undoubtedly familiar with this Stone Age-version of “Friends”. It even managed to convince some people that humans and dinosaurs co-existed during the same time period. So it might not be too surprising that it also apparently managed to convince at least one man that he had the capacity to stop a car with his feet.

The 24-year-old man was arrested near Detroit for the failed use of this unconventional braking technique. He’d found that his brakes weren’t working, but decided to drive his pickup anyway. When using his feet as a brake didn’t work, he drove into four other vehicles.

Big rig accidents can be among the most deadly, but in one case, a crash saved a truck driver’s life. In 2011, a truck driver from Pennsylvania was munching on an apple while behind the wheel. He choked on an apple chunk and passed out. Unsurprisingly, the truck crashed through a concrete barrier, throwing the unconscious trucker against the steering wheel. Investigators found an apple chunk on the dashboard, and concluded that the crash performed its own version of the Heimlich maneuver.

The Bart Bernard Injury Lawyers has secured millions in jury awards and settlements for our clients, many of whom sustained injuries and property damage in car accidents in Rouge and Lafayette. Louisiana car accident lawyer Bart Bernard never charges a fee unless your case is successful. Call today to request your free case review.